Tattoos and body art are far more sophisticated as more artists are taking their craft seriously. A staggering fact in that Americans spend $1.65 billion annually, and over 45 million of us already have at least one tattoo, Statisticbrain.com reports. Tattoo-removal revenues surged 440% during the past decade, reaching $75.5 million in 2014 and, by 2018, a projected $83.2 million, according to IBISWorld.com. 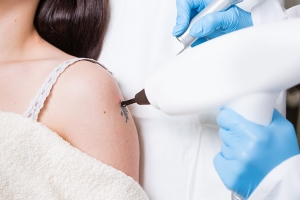 According to the American Society for Aesthetic Plastic Surgery (ASAPS), tattoo removal is on the rise and people are paying top dollar to clean up their skin. Removal procedures reached 45,224 in 2013 in the U.S. compared to 40,801 procedures in 2011. Women are more likely to seek tattoo removal as they accounted for 32,888 (72.7 percent) of procedures. The amount of money paid for treatments also experienced a steep increase, doubling from 2011 to 2013. Depending on the size, color and complexity of the tattoo, removal may require several laser treatments and can run from hundreds of dollars to thousands of dollars.

Tattoo ink in the skin is removed by using a specific wavelength of light (1064 nm) that passes through the skin and is absorbed by the ink. The rapid absorption of light energy causes the tattoo ink to break into tiny particle remnants that will then be removed by the body’s natural filtering systems. The laser removes the tattoo while damaging the surrounding skin to some degree.

Laser treatment for tattoo removal has improved significantly over the years, making it easier and less painful to remove unwanted tattoos. However, complete removal can be difficult in many cases, especially for people who have dark skin or multicolored tattoos.  The light and heat help remove the tattoo but also create laser wounds. Wound healing will occur over a period of weeks.

For any tattoo removal process, treat the skin in the same manner as recommended for a laser treatment.  NeoGenesis Recovery, our most advanced product with abundant S²RM®, should be used a minimum of twice daily to speed healing, reduce inflammation, irritation and downtime.  In addition, our Intensive Moisturizer is to be used twice daily, or as often as needed, to hydrate the skin and provide proper barrier function.

Two weeks after a procedure when significant healing has occurred, Recovery may be reduced to a maintenance application of 3 to 4 times per week.  Our Skin Serum is now introduced in place of Recovery, twice daily, followed by our Intensive Moisturizer.  If additional procedures are needed for optimal results, begin with Recovery applied twice daily along with the Intensive Moisturizer immediately following the procedure.